Metals have always been and will always be of great importance for industrial and household uses.

Its importance can be judged by the fact that 84 elements in the periodic table are metals.

Metals possess various distinctive properties and these properties can even be combined in a form of mixture to form further metals of vital use known as alloys.

Out of these several properties, we are using the strength of metals to identify what is the strongest material on earth?

Before reading the list below, it is very important to know what actually strength of a metal is. Making the term simpler and non-technical for our readers, it is basically the resistance of a metal to deformation and failure. It should not be confused with hardness of metal. Hardness is a different aspect which is basically the resistance to dents, scratches and other permanent damages under compressive forces.

Interested in knowing what are the top 10 strongest metals around you? Have a look at our classification below: 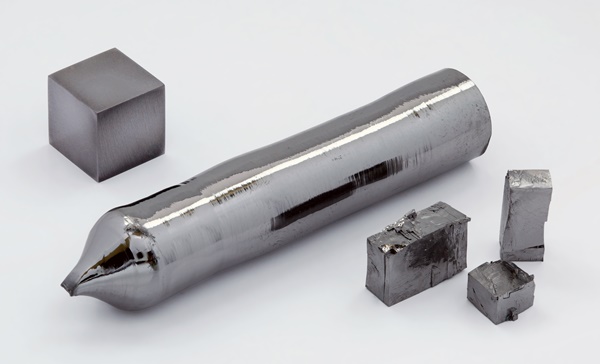 With an atomic number of 73, this metal was discovered in the year 1802. Tantalum melting point of this metal is as high as 3,020 degree Celsius. This is almost 15 times hotter than your pizza oven!

This metal is of great vitality in the electronic industry. It is used in the manufacturing of capacitors and high power resistors. Tantalum electrolytic capacitors is a famous class of electronic component made by this strong metal. This metal has the ability to increase the capacitance within a small volume. This means that the use of this metal is widespread in micro-processing, mobile and tablet industries.

A very noticeable use of this metal is in the dental and surgical industry. Due to its inertness to human body, surgical and dental instruments are made by this metal. 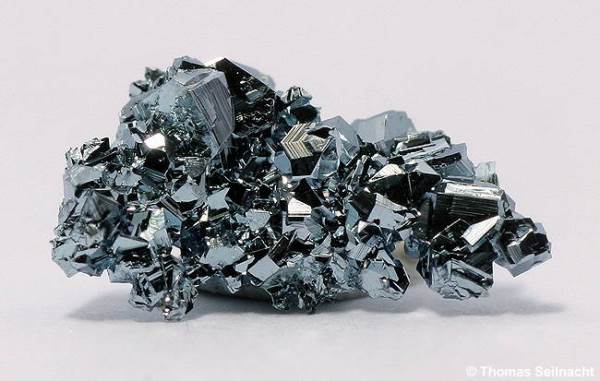 Ever wondered what is the metal from which the beautiful fountain tips are made of?

The metal is Osmium. It has an atomic number of 76 and melting point of 3,033 degree Celsius.

Osmium was discovered in 1803 and since then is being used for multiple purposes. It has a vibrant bluish white appearance. 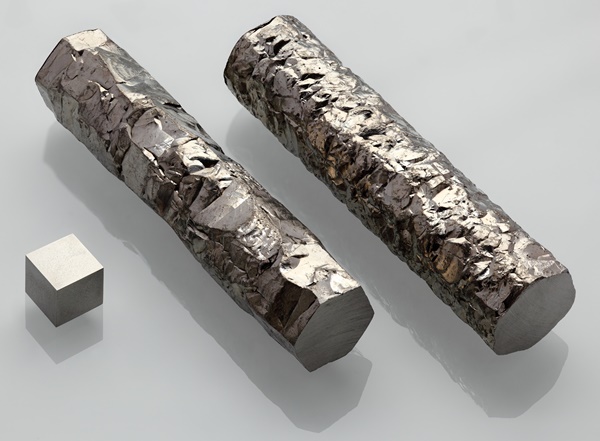 This element takes its name from a Persian word “zargun” which means “gold-colored”. As its Persian name suggests, it is a greyish-gold metal with an atomic number 40. It is a highly corrosion resistive metal.

Its use in the nuclear and aeronautical industry is of particular significance. Its compound ZrO2 is of specific significance for the use in space vehicles as it can withstand high temperatures and can adapt to various environments.

Moreover, use of Zirconium alloys in nuclear reactor tubing and its use in making strong and tough materials like knives and scissors proves how much strong Zirconium metal is.

Zirconium has an important part in the medical industry in the diagnosis of kidney diseases and dialysis. 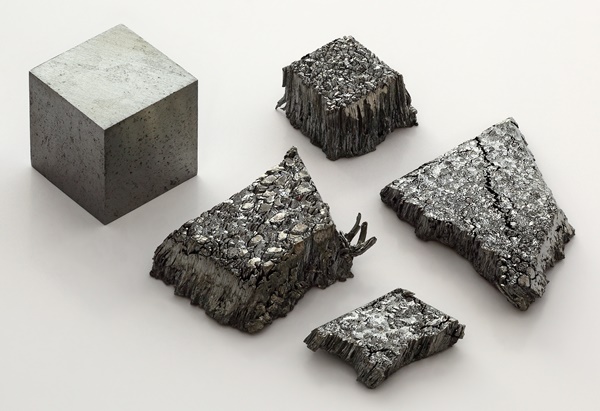 Lutetium is one of the most expensive metals. It takes the 71th atomic number in the periodic table. This element is one of the rarest metals on Earth. It is found in very minute amounts in the Earth’s crust and it is extremely difficult to separate Lutetium from other metals.

The use of Lutetium is not widespread. However, some of its major uses is as a catalyst in the petroleum industry. It is used in refineries for petroleum cracking. It helps make useful compounds by pacing up the process of cracking. Furthermore, it is used in the process of polymerization, alkylation and hydrogenation. 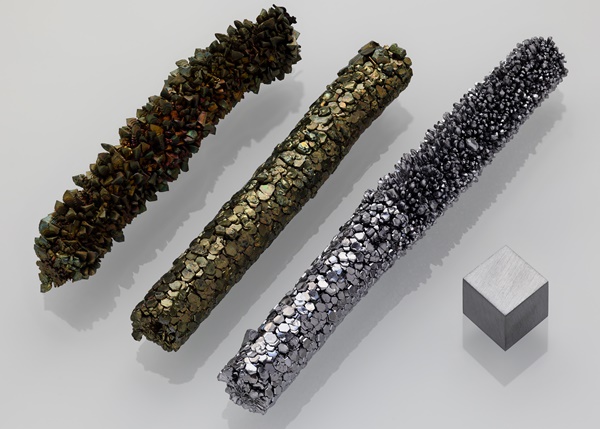 This element is named after Vanadis who is supposed to be the Scandinavian goddess.

Vanadium has a melting point of 1910 degree Celsius and a density of 6gcm-3. Its color is silver and this metal resists corrosion. It is naturally found in almost 65 forms which includes minerals like Vanadinite, Carnotite and Patronite.

Most vanadium produced is used as an additive to steel because vanadium makes steel very tough. Vanadium enables steel to be used in the toughest parts in automobiles and mechanical industry. Parts like crankshafts, pistons, engine rings, wheel axles and much more are made from steel due to the strength provided by vanadium.

Its compound Vanadium Oxide also plays a vital role in the ceramic and glass industry and is used as a catalyst in the production of Sulfuric acid by the Contact Process. 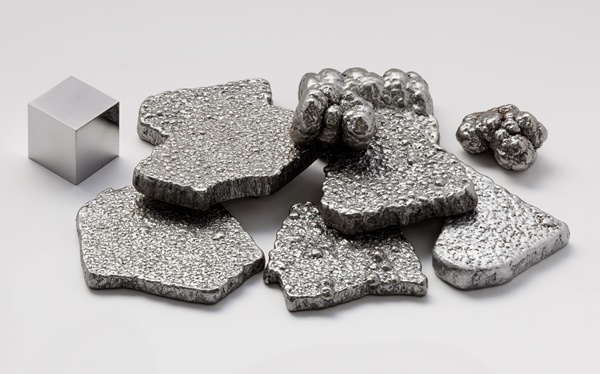 I bet everyone reading this article does know about iron. Iron is everywhere around us. Indeed everywhere: from your household utensils to the mighty skyscrapers. Iron has an atomic number of 26 and a melting point of 1538 degree Celsius.

Iron is one of the four components that make up 90% of Earth’s composition!

Since Iron is so abundant and found so easily, its main use is in the formation of steel. This alloy is necessary because raw iron is very corrosive. Carbon is the additive used in iron to transform it to the much stronger form of iron i.e. steel. Steel is then the main component in construction. It is also used in the making of heavy machinery where strength and toughness is the main requirement.

A vital use of iron is in the formation of ammonia through Haber-Process. 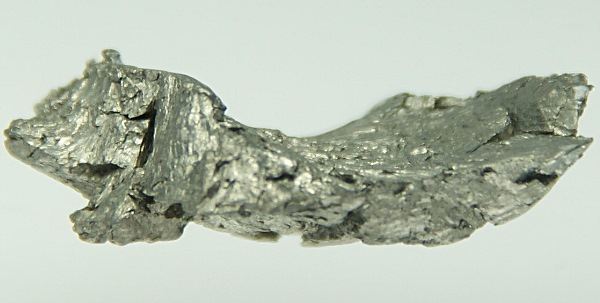 Gadolinium takes its name after the famous Finnish chemist and mineralogist Johan Gadolin.

With a tensile strength of 430 x 106 Pa, Gadolinium is a main component in the manufacture of magnetic devices. Such devices include magnetic storage media like hard disk, compact disks. It is naturally found in minerals like Monazite and Bastnaesite.

According to sources, Gadolinium has been used as a component in older cathode ray television screens.

Gadolinium plays an important role in saving lives by being a major component in Magnetic Resonance Imaging (MRI). This is used particularly in diagnosis of cancerous tumors.

Moreover, it has the ability to absorb neutrons easily so its use in nuclear reactors’ cores is common. 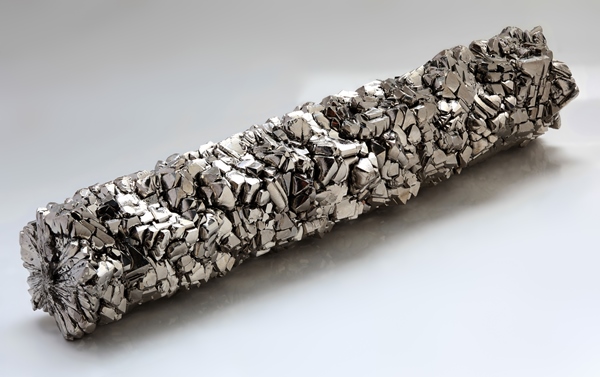 Titanium, with an atomic number of 22, is a very unique metal. It is unique because of its low density yet inexplicable strength. Titanium has a strength of 434 x 106 Pa. Low density combined with high strength means that its use in places where high strength is needed with low weight is widespread. Its use is common in manufacturing of some aircraft and rocket parts that need high strength with low weights to be able to lift off easily. When combined with aluminium and iron, titanium alloys are used even in missiles as it can withstand high temperatures and pressure that a missile goes through its projectile.

A very helpful use of titanium is in the form of titanium oxide to make sun screens. Sun screens help save the skin from harmful UV rays. 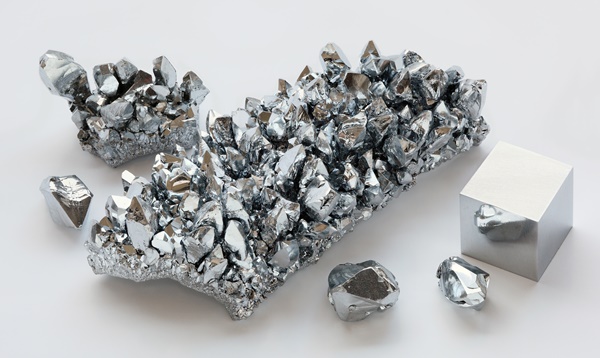 Taking the 2nd position in strength of metals is chromium. It is naturally found as ore in form of chromite. It has a tensile strength of 689 x 106 Pa.

The most widespread use of this silvery metal is in stainless steel formation. When combined with iron, this metal eradicates the issue of rusting of iron. It also turns steel into a shinier and more impressive appearance which is often seen on the railings of stairs in malls.

Chromium’s use in expensive bathroom fittings and in the manufacture of car bumpers is also widespread. This metal gives a dashing look to cars by its shiny and attractive appearance.

Chrome is used for tanning purposes of leather and more than 90% of leather is currently tanned by chrome!

One of strongest metal in the universe tungsten takes a firm position. With an extraordinary tensile strength of 1510 MegaPascals, Tungsten is by far the strongest naturally-occurring metal. It has the highest melting point amongst all naturally occurring metals.

Tungsten has the 2nd highest melting point amongst all of the elements in the periodic table i.e. metals and non-metals!

If you are inquisitive about the metal that withstands high temperatures in electrical applications then Tungsten is your answer. Tungsten filament in light bulbs is a common example for this.

When combined with steel and other metals, a small amount of Tungsten can significantly increase the strength of the alloy making its use in military applications viable!